I'm teaching you about community building this week on the podcast! Building a community around your brand.

Today, I’m telling you the SECRET to growing fast on YouTube that NOBODY ELSE Is telling you. Seriously. It’s called trend hacking, and I promise you’ll get results.

Want to watch a video version of this post? I’ve got you covered!

Trend hacking is probably the way that all of your favorite YouTubers have grown the  most, whether intentionally or by accident.

You have to get your tags right and release it at the right time, but it’s ABSOLUTELY possible to ride the wave of a trend on YouTube.

You can trend hack yourself or other people. But you have to be REALLY intentional about how you trend hack if you’re going to do it.

When a video that wasn’t present on the top list before pops up now, that means that YouTube is currently serving up your video to people. Yay for popping off in the algorithm!

Something in my  personal analytics that makes me extra excited is when a new video that I filmed in the last month makes it to the list of my most popular videos in the last 28 days! That is MASSIVE. That means that a new video I created is getting picked up by the YouTube algorithm.

To summarize – you should always start with the top performing videos on your channel in the last 28 days. On this list, look for…

Videos that weren’t there in the last 28 day period

For the best of both worlds, a new video that also wasn’t there in the last 28 days!

Then, I know that it would benefit me to create other, similar videos! Make content for a similar audience, using a similar storyline, a similar strategy, or about a similar topic.

As a reminder, you DON’T want to trend hack yourself if the best-performing videos on your channel won’t drive the right audience your way. For example, one of my top-performing videos right now is “how to start a blog in 2020.” Someone who’s looking to start a blog likely won’t want or need to watch the rest of my videos, so that doesn’t actually help my channel grow.

To trend hack yourself, you want to figure out how you can create content similar to what more people are watching on your channel. Throw more of that at YouTube, and the algorithm will love it!

A quick chat about the algorithm

When people click and watch your video, especially if they watch more of it than usual for your channel, YouTube will pick up that video and recommend it to people. Then YouTube is hungry for more of that type of content! So if you can be the one to serve it up to the algorithm, the algorithm will recommend more of it.

If some other creator sees a video doing well on my channel, they might also want to trend hack it (I’ll get to that in a second). But if I also trend hack that video when they do, MY content will take precedence because the original video came from me.

But if I let the opportunity go by and don’t make more content on that topic, then someone else’s content will get picked up.

You can also RUIN your chances of trend hacking with bad content. You could have a perfect title, tags, and publish at the right time, but if your content is crap and people don’t stick around to watch it, your video won’t get picked up by the algorithm.

YouTube’s job is to pair the right content with the right viewers. The algorithm wants to throw new content that people would enjoy at them – and it can be yours!

How to Trend Hack Other People’s Videos

Something that’s important to remember when trend hacking someone else is how current a video’s popularity is. There might be a video on someone else’s channel with a TON of views, but if the video is CURRENTLY being picked up by the algorithm, then it won’t do you any good. So if the video is a year old, it probably isn’t being picked up anymore.

To trend hack other people, start in your ‘Audience’ Analytics

If you head over to your “audience” analytics in your main channel, then there is a box on the right that says “other videos your audience watched.” That box is going to be your BEST FRIEND.

This gives you a TON of information.

First, it shows you channels that are similar to yours that you may not have known about! You can go see what their channel is all about. Make note of all of the channels listed and check out their popular content!

You also learn subjects that your audience is interested in! Check out the full list of videos and see what topics people who follow you want to learn about. Then, go and create some content about them!

When I say create similar content, I DO NOT MEAN COPY.

99% of the time, when I browse the other videos box, I DO NOT watch the video. I just see the topics.

The most successful channels are ones that work hand-in-hand with other channels.

There is NOT a competition on YouTube. People are constantly coming to the platform and looking for new things to watch. And working with, recommending, and providing additional content to that of other channels that you want to be like tells the algorithm that people who watch their channel will like yours and vice versa. It’s a win-win situation!

Some notes for new channels

If you’re a brand new channel on YouTube and don’t have the statistics about what your audience is watching, then it’s your job to find channels who you’d like to emulate. What other creators would viewers of your channel enjoy?

Additionally, you should keep your expectations in line with where you are. If you have 0 subscribers, then you being able to trend hack a creator’s video with 100,000 subscribers, that’s pretty slim. Make sure you’re trend hacking people’s videos with a similar subscriber or view count to yours.

When you’re trend hacking a channel…

Start by going to their channel and sorting the videos from newest to oldest. From here, check out the view counts on that channel’s more recent videos. Which ones are doing exceptionally well? Can you create content in a similar vein?

Without a shadow of a doubt, YouTuber’s who have a video that has taken off intentionally has done trend hacking. I promise. And with this guide, you can do it, too! 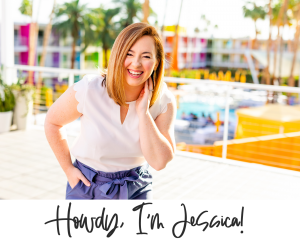 Hey Jessica is a HUB for women to learn how to love life and live well. With tools, tips, and tricks, you’ll learn #allthethings you need to know to make sure this life of yours is one worth living. Founded by Jessica Stansberry.

Tell me your an entrepreneur without saying you’

Y’all better watch out for 2021 Jessica cause th

Oh y’all, look at these yummy and very Jessica c