If you haven’t heard, I decided to convert my studio into a retail store… and I did it ALL in 30 days. I’m sharing what I learned opening a retail store, because too many people don’t open the curtain!

What I learned opening a retail store

Want to listen to the podcast version of this episode? I’ve got you covered!

Why did I want to start a retail store?

Basically, I had rented a space as a studio and it wasn’t working out. I had a lease on the building, so I wanted to repurpose it into something that would offset the rent! BUT another HUGE reason I wanted to do this is because nobody is pulling back the curtain on retail. I wanted to be able to share my experience with you, candidly. So let’s DIVE IN.

The Foundry Downtown is a store that’s made up of different vendors from local small businesses, artisans, etc. There's everything from jewelry to home decor to candies and clothing. I really wanted it to feel like a boutique rather than a mish-mash of vendors, and I think it turned out really well.

I made the decision to open it and actually opened the doors in 30 days. If the store had been totally full of my products OR if I didn’t have help, then that wouldn’t have been possible.

I was also launching a course at the same time… so basically, the end of May-June was a PACKED 30 days. But because of our local area, I knew that the store needed to be opened as quickly as possible because the summer months start our biggest tourist season.

Each vendor rented a certain amount of space from me, and they pay a monthly fee for that space. They are completely in charge of their own set up and products, and the store takes 10% of each of their sales. I based the rental fees and commission rates on stores in the area doing a similar thing.

IF I keep the store, my first round of vendors’ contracts finish in December, and my plan is to increase the commission that the store takes from each sale.

I want to be COMPLETELY candid with you about this whole experience. So let me be real with you – I don’t want to work in the store, so I’m not going to do that. That means I have to hire staff, which actually happened really easily. I did have one staff member let me know that they couldn’t work about 3 days prior to opening, and I’m NOT joking when I say I turned to the vendors setting up and someone helping a vendor wanted a part-time job… and I hired them on the spot.

The actual vendor booth fees that they pay monthly could EITHER pay for my staff or my rent. For me, I’m looking at that to pay for the staff since I was already paying for the rent anyway. Any of the commission that the store makes is going towards the rent.

Being able to pay my staff with the vendor fees made it a no-risk situation for me, because even if the 10% commission only covers part of the rent, I’m paying less than I was before for the space.

When I’m recording this, we’ve been open for almost one week

It’s been really interesting to try and figure out what a typical weekday looks like for retail in my area. I had NO expectations of what kind of money was possible in retail going into this, so it has been a learning curve for sure.

This Tuesday, the store did just as well in sales as it did on Saturday last week, which was surprising. I’m using that to gauge what the store’s income will look like.

When I was doing this store, I had two outcomes in my head. I will either put my own stuff in, love it, and eventually as vendors leave, fill it up with my own things and eventually make it my own store.

The other option in my head was that I would start the store and be okay with the fact that I built up a business for someone else. I have created a business that is a NO RISK situation for someone else to buy, because the vendor fees over the rent costs. If someone wanted to work in it full time, they would profit the entire 10% commission.

Because I’m not working in it full-time, I’m not looking at a profit at all, to be honest. I’m looking at paying the staff with the vendor fees and paying the rent with the 10% commission.

Now, I’m trying to figure out my plan moving forward

I spent a very long time dealing with bullcrap on a day-to-day basis in my business, and I have worked very VERY hard so that I don’t have to do that anymore. Starting the store meant I went headfirst into dealing with some junk.

I did put some pieces in place to help with that. My sister is going to be working in the store on Saturdays, and she is managing the staff remotely during the week. Unfortunately, I’ve still had to deal with a lot of stuff.

Some of the vendors think that the store is THEIRS, and they have opinions on how I run it, which really bothers me. I hate being micromanaged (part of the problem I had in corporate), so that bugs me.

My point is that even within the 30 days of prep and the week we’ve been open, I’ve realized a lot. The staff have been AMAZING, and most of the vendors have been incredible too! But there have been a few instances that make it very frustrating for me. Since I know I’m not making a profit from this store in its current model, I will either need to put my own products in the store or take a higher percentage of commission to turn a profit.

BUT I know that if someone wanted to own this store and work in it full-time, then they could absolutely make a profit! Even if they just had one person to help them here and there.

I’m leaning towards selling the business.

Again, I wanted to either put my own stuff in there and morph it into a space for Jonathan and I to sell things, or be okay with selling it. And at this point, with the brand I’ve built, I’m okay with selling it. I have created it as a place where you can go to get anything, and people are loving that!

The power of retail

The real power in retail is owning AND working in the store.

If I was the person working the store every day, it would be profitable for me. But because I’m not in that situation.

The other real power is charging a higher commission rate. I based my rate on other stores in the area, but if I keep the store I will be raising commissions when my initial contracts are up. The store gets much more traffic than other stores that I based the commission rates off of, and the vendors are already making really great money.

Putting your own products in the store with a markup is the other power of retail. If half the store was my stuff and I was making 35-50% profit on those items from retail markup, then I would be profiting WAY more. But that also requires a lot of money up front and has a major risk.

After being open for just 3 days, almost every vendor in the store had made enough money to cover their booth fee for the month – and I didn’t even charge booth fees for June. So that was a great marker for them.

There are SEVERAL vendors who have made close to $1,000 in the first 5 days.

Some vendors have a really large space with a lot of low-cost items. Then there are other vendors who have smaller space with much higher priced items. It’s been interesting to me to see the differences there.

In the first few days, I was worried that the vendors with the high-priced items weren’t going to do very well. But as the week leveled out, they ended up pretty even with the people who have big spaces with low-cost items.

That tells me that I would MUCH rather have a store where everything is higher-quality and higher-cost, because it will take way less items sold to make the same amount of money. But it could totally be a sign for somebody who wants to sell lower-cost items that they can do it.

I have only had one vendor out of 22 who hasn’t made any sales, but that is an odd case and I’m not worried about it.

The final thing I’ve learned is that you HAVE TO SET BOUNDARIES.

The way I opened a retail store obviously affects this because I’m working with a lot of vendors. In many cases, you’d only have to deal with staff. But in my case I’m dealing with 22 different vendors, and there are a lot of boundaries that have to be set there.

Thankfully, I’m REALLY good at that. I started off the relationship with boundaries. There were a lot of boundaries communicated to them via the contract and I don’t waffle back-and-forth on things. But that doesn’t mean that people haven’t tried to cross those boundaries with me.

When opening ANY kind of business, you HAVE to have boundaries in place. And those will be different for everybody, because we’re all different people. I personally don’t like to deal with communicating one-on-one with people when I can do it in a group setting. And I don’t want to deal with bullcrap.

I’ve also had to set boundaries as we go when situations come up that I never imagined would happen.

Boundaries come really naturally to me, but if they don’t for you then this is a muscle that you’ll need to work.

Want to learn more about my retail store experience? 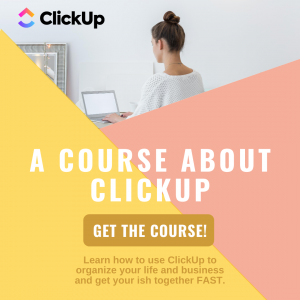 SO YOU WANNA ADD "SPEAKER" TO THE RESUME!? ⬆️

Um so, hi. I have neglected my feed a bit lately (